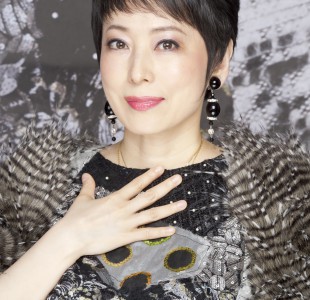 A native of Tokyo, Japan, pianist Mari Kumamoto began studies at the age of five. Relocating to Spain at the age ten, Ms. Kumamoto continued piano with Professor Joaquin Soriano at the Madrid National School of Music eventually obtaining first prize in the 1979 Spain Youth Music Contest. Accepted as a scholarship student to the Julliard School of Music in 1982, Ms. Kumamoto studied under the acclaimed pianist and teacher Sascha Gorodnitzki. Her studies during this time reflect a focus on the Classical and Romantic composers.
In 1985, Ms. Kumamoto entered the Royal Academy of Music in the U.K., where she studied under Christopher Elton, and privately, under Andrew Esterhazy. After winning the prize at the Newport International Music Competition for Young Pianists, she graduated from the Royal Academy of Music in 1986, becoming the youngest recipient of the Recital Diploma. Later that year, she returned to Japan to embark on her first national tour. Concerts followed throughout Japan and in 1991, Ms. Kumamoto made the world’s first recording of the complete works of the Spanish composer Frederico Mompou (1893-1987).
In 1993, Ms. Kumamoto translated the biography of Mompou, “Musica Callada” which catapulted her to the national stage once again as she was named an “Associate of the Royal Academy of Music”. This is a distinction conferred only upon Royal Academy graduates who have shown outstanding achievements in the field of music.
A series of concerts and recitals throughout Europe followed, the first in 1994 with the Czech Philharmonic Orchestra at its New Year’s Eve concert. In 1996, Ms. Kumamoto held a recital in Spain, as a participant of “Japan Week” and later returned back to Prague in 1998, performing with Josef Suk and the Suk Chamber Orchestra.
After an extensive and highly successful European tour, Ms. Kumamoto began focusing on concerts in her native Japan. Hoping to share various musical styles including the Spanish and Latin American repertoire, Ms. Kumamoto has given yearly solo and ensemble recitals since 1998. In 2006, Ms. Kumamoto was invited to perform with the members of Vienna Philharmonic Orchestra in a series of recitals in Tokyo.
Invitations from international orchestras sparked yet another series of overseas concert tours. Most recently in 2010, Ms. Kumamoto embarked to the Middle East including a tour in Egypt with the Cairo Opera Orchestra followed by a weeklong recital tour in Jordan. In 2011, she performed in Caracas with the Venezuelan Chamber Orchestra as guest soloist in the Gershwin Piano Concerto. Ms. Kumamoto’s most recent activity is dedicated to promoting the piano music of Japanese composer Okumura Hajime whose music reflects the traditional melodies of Japanese folksongs.
Ms. Kumamoto has written and translated several key books including “Dear Rose, Please Talk to Me”, “Let the Sound Shine” and “Puerta del sol, La Pianista”. In 2008 she published “A Happy Life Fulfilled with Piano” a best selling paperback in Japan. In addition, her CD collection is extensive with her most recent on the piano music of Mr. Okumura.
Ms. Kumamoto is currently Professor of Music Performance Department, Osaka University of Arts.